An Evening with Mozart

Read the Program Notes below, then Listen to the concert

This concert was originally performed on: 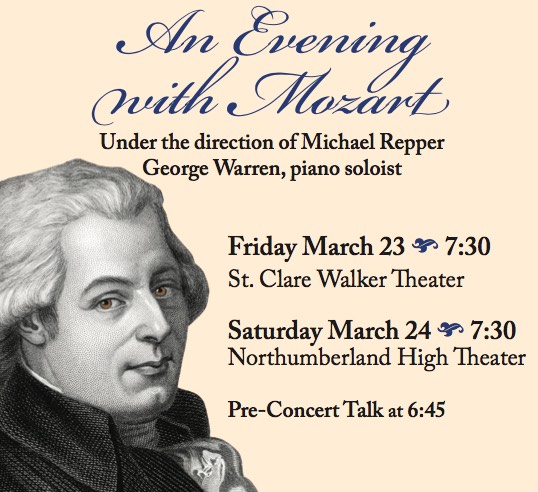 The Northern Neck Orchestra Presents
Under the direction of Michael Repper

Tickets $30 online or at the door. Students free with online reservation.

Welcome to the winter concert of the Northern Neck Orchestra’s second season under the direction of Michael Repper. For tonight’s evening with Mozart, Maestro Repper has selected three superlative masterworks. We will hear Mozart’s most exquisite serenade, his most popular piano concerto, and his most magnificent symphony. If you think of Mozart as writing happy and serene Classical music while all the drama and passion belong with the Romantic Beethoven, hold on to your seats and prepare to enjoy this exciting concert.

The concert opens with Mozart’s Eine Kleine Nachtmusik (1787, K.525) which translates to “a little night serenade.” He called it “little” not because it is of slight importance but because he only wrote four movements instead of the seven or eight usual for such Viennese serenades.

Vienna was famous for its “night music” played outdoors in the summer by musicians going from one neighborhood to the next. Mozart’s music may sound like a simple entry in this genre, but it presents a very clever and sophisticated simplicity. Musicologists have marveled at how four short movements can hold an entire compendium of classical music in which Mozart demonstrates his unsurpassed mastery of musical forms.

Even seasoned concertgoers and professional musicians marvel again and again at such perfection. According to Aaron Copland, with Eine Kleine Nachtmusik Mozart “… tapped once again the source from which all music flows, expressing himself with a spontaneity and refinement and breathtaking rightness that has never since been duplicated.”

The work is full of elegance, wit, and charm. The first movement is fast (allegro). It sparkles with jaunty and graceful themes. The second movement is a quiet and expressive Romanze played andante (slow). The third movement is a minuet and trio, flowing and colorful. The finale movement is also played allegro and is musically buoyant. A long coda brings the serenade to a spirited conclusion.

The major work on the first half of the program is Mozart’s Piano Concerto No. 20 in D minor (1785, K.466) with soloist George Warren. Mozart completed writing the concerto on February 10, 1785 and performed its premiere the very next day. His father Leopold wrote that his son did not even have time to rehearse the last movement with the orchestra for the first performance, as he was too busy supervising the copyist writing out the orchestral parts.

The day after the premiere, Haydn himself was moved to write to Leopold, “I tell you before God, and as an honest man, your son is the greatest composer known to me by person and repute, he has taste and what is more the greatest skill in composition.” This concerto became a favorite all over Europe. Its dark beauty and impassioned power attracted soloists and audiences alike especially during the Romantic musical period of the 19 th century. It was the only non-Beethoven concerto that Beethoven ever performed; he wrote his own cadenza for it.

There are two places in the concerto for a cadenza to be played: in the first and third movements. (A cadenza is a short solo piece inserted into a concerto, often displaying the soloist’s virtuosity.) In Mozart’s time, the performer would be expected to create his or her own cadenza. The cadenzas played by Mozart (many of them improvised) for some of his piano concertos are preserved, but the ones for No. 20 are missing. The one Beethoven wrote is often played today, and that is what George Warren will play with the NNO. Over the years many other composers wrote cadenzas for this concerto, even jazz pianist Chick Corea, who improvised a cadenza with flamenco rhythms and sounds.

Concerto No. 20 was Mozart’s first to be written in a minor key. The concerto’s power and immediate popularity established D minor as the darkest of keys, with great tragic potential. The first movement opens ominously with quiet, threatening D minor chords. The piano never plays these chords, and the orchestra never plays the piano’s themes either. This tense relationship between orchestra and soloist pervades the entire concerto giving it high drama.

The second movement offers some relief from the first in its serene tranquility. A stormy central section recalls the unease of the first movement, but the simple heavenly beauty returns at the end of the movement.

The third movement, the finale, is highly charged and forceful. The piano and orchestra vie for supremacy, with no relief of the conflict in sight. Suddenly, the soloist appears to give in, and the radiant coda finishes in the sunny key of D major.

The second half of the program is dedicated to Mozart’s Symphony No. 40 in G minor (1788, K.550). Mozart composed symphonies 39, 40, and 41 (his final symphonies) in a period of just six weeks during the summer of 1788. All three are masterpieces of remarkable musicality, each in its own right.

Yet No. 40 is the most arresting of the three, partly because of its unusual minor key. It has also been described as more imaginative, melodic, powerful, and showing more largeness of musical thought than the other two. It has also been the most influential on other composers, because it has been quoted or its style or themes used in some way by Beethoven, Mendelssohn, Bruckner, Schubert, even Haydn and Rachmaninoff.

The symphony’s four movements follow the usual sequence for a classical symphony: fast—slow—minuet—fast. Each movement is in sonata form (theme—development—recapitulation), while the minuet is in the usual form of minuet—trio—repeat minuet. As you listen to the symphony, notice how Mozart infuses each of these standard forms with individuality and originality.

The first movement (Molto allegro, very fast) opens in an unusual manner—not with a theme but with something our modern ears might hear as a “vamp till ready” accompaniment in the violas. When the themes do appear they have irregular phrase lengths, with dramatic dynamic contrasts, making the music sound fragmentary and uneasy. These jarring innovations give the music a sense of excitement and a feeling of mystery.

The Andante (slow) movement is gentle and relaxed, though it still sounds sad and anxious because of the minor key. The central section casts a darker shadow musically, but the gentleness returns at the end.

Even the Minuet movement has drive and energy. The music sounds sinister compared to the cheerfulness of the Eine Kleine Nachtmusik minuet. The trio section features the horns with a pastoral feeling.

The Rondo movement is played at a tempo of allegro assai (quite fast). The music is the most original of all the movements. It sounds aggressive, even violent and angry. The movement begins with the fast crescendo of a rising arpeggio (a musical figure known at the time as a “Mannheim rocket”). The development section begins with a dissonant passage, even including some 12-tone writing. Unlike he did with the concerto, Mozart finishes the symphony with no concession to a happy-sounding ending in a major key. He drives the finale dramatically with seemingly limitless energy to a most passionate G minor conclusion.