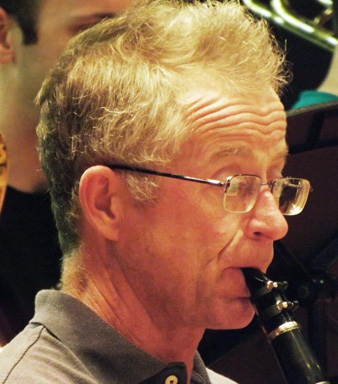 David’s parents started him on private clarinet lessons at age 10 with Joe Sulkowski, principal clarinet with the Erie Philharmonic. He continued these until the end of high school.

Although not a music major, David continued studying clarinet at Clarion State College, and participated in concert band, orchestra, and various small ensembles. Later, while pursuing another degree at Mercyhurst College in Erie, PA, he played in their D’Angelo School of Music wind ensemble (Robert Dolwick, conductor) and orchestra (Walter Hendl, conductor). While in Erie, he also played in the AFM sponsored Sulkowski Concert Band for 20 years; in the Erie Concert Band; as a substitute in the Erie Chamber Orchestra; and in the Northwest PA Concert Band (John Fleming, conductor).

David started playing the banjo in college, and has played with several bluegrass groups over the years in Erie and in Washington, D.C. At one time, his band hosted a local cable TV bluegrass variety show in Erie.

About 20 years ago, David became interested in bagpipes, and has played in the Kilmarnock & District Pipe Band since its beginnings in 1998.