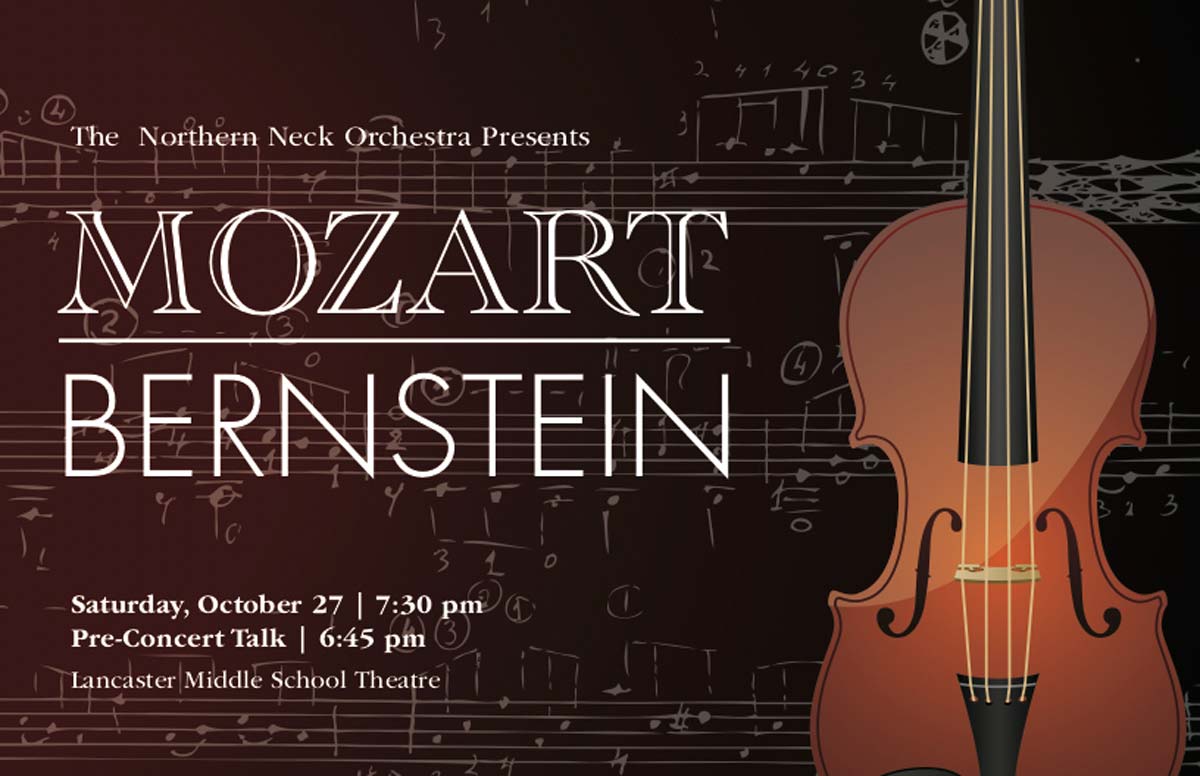 Tonight’s concert marks the opening of the Northern Neck Orchestra’s 2018-19 season under the direction of Michael Repper, conductor and music director. The centerpiece of the concert is Mozart’s most daring violin concerto, featuring the dynamic young soloist Grace Park.

The program also features Sibelius’ beloved Finlandia and some exciting music by Leonard Bernstein in honor of the 100th anniversary of his birth. The musical world has dedicated much of the past year to enjoying and performing Bernstein’s music. Tonight we too are joining the world-wide celebration of his 100th birthday.

The concert opens with Mozart’s Violin Concerto No. 5 (K. 219, 1775). Wolfgang Amadeus Mozart (1756-1791) composed all five of his violin concertos in quick succession in 1775 when he was just 19 years old. The concertos are the earliest of his works that remain in the concert repertoire.

All five concertos are works of heartfelt beauty, captivating melodies, and rich orchestral textures. The first four have the standard fast-slow-fast movements, and repeated melodic patterns, a form well established by Vivaldi. With the fifth concerto, Mozart began to experiment. The result is that the fifth is the most original and adventurous, the longest, and the most popular of the five. Plus, it requires more technical prowess on the part of the soloist than any previous concerto by any composer.

The first movement is marked with the unusual tempo allegro aperto (fast and open: broad, majestic). After the opening orchestral music, the violin, instead of restating the melody, completely changes the character of the music by playing a slow singing melody followed by a soaring new melody. These novelties are followed by more dialogue between the violin and orchestra.

The adagio movement shows the tremendous lyrical beauty that Mozart is famous for. One critic calls it a movement of “almost painful beauty.” The violin plays eloquent, rapturous music as Mozart develops two beautiful themes.

The inventive finale opens with a charming minuet-like rondo theme. This is followed by a boisterous and wild “Turkish” style dance that is aggressive and exotic sounding. There was a fascination at the time with eastern cultures, and anything with a vaguely oriental sound would be called Turkish. (The sound was so popular that some pianos featured an extra pedal that operated a pair of cymbals.) Mozart adds explicit Turkish-style percussive sounds here by having the cellos and basses strike their strings with the wood of their bows. After the Turkish dance, the music returns to the elegant rondo theme. As a final surprise, the concerto ends with a comparatively subdued farewell.

The second half of the program includes three smaller works: CBS Music by Bernstein, Finlandia by Sibelius, and Slava! by Bernstein.

Leonard Bernstein (1918-1990) was born in Lawrence, MA, the son of Russian immigrants. Instead of taking over his father’s beauty supply business, he became the most multitalented American musician of his time. He was the first great American conductor, the first classical music television star, an excellent pianist, and inspired educator. He is most popularly known for composing the music for the Broadway musical (1957) and film (1961) “West Side Story” and for his “Young People’s Concerts” on CBS network television (1958-72). These concerts were moved to prime time in 1961 in response to the famous speech of that year by the FCC chairman who called television “a vast wasteland.”

The orchestra will perform a Bernstein piece with the innocuous title of CBS Music (1977). According to Maestro Repper this piece is “extremely rarely performed and even more rarely recorded – what a treat it will be for our community to hear it live.”

For the occasion of the CBS network’s 50th anniversary, Bernstein was asked to compose accompanying music for the televised celebration. In all, he wrote five miniatures: I. Fanfare and Titles; II. Quiet Music; III. Blues; IV. Waltz; V. Chorale. After the broadcast, all the movements were adapted and orchestrated in the Bernstein style by various composers, and those are the versions we will play tonight. The pieces are truly miniatures, for example, the charming waltz (3rd movement) is only 29 seconds long. Bernstein cleverly devised the opening fanfare motif of three notes: C, B-flat (B in German), and E-flat (Es in German), which correspond to the network’s call letters. He then unites the entire work by using this motif in all five movements.

Next on the program is the symphonic poem Finlandia, often perceived as an anthem of freedom, or a national anthem for the whole world. Jean Sibelius (1865-1957) is the most revered of Finland’s composers. As a recognition of his value to Finland, the national senate voted him, at just age 32, a life pension, which allowed him to give up teaching duties to compose and travel, conducting much Finnish music around Europe.

In the late 19th century Finland was a grand duchy within the Russian Empire. Because of Finnish movements toward national freedom, the Russians cracked down on civil rights, and even closed the newspapers. The press responded with a benefit concert for out-of-work journalists. Sibelius composed the music, including one piece called Finland Awakes! That celebrates hopeful nationalism. There followed years of passive resistance until 1917 when Finland declared independence. The Finns embraced Sibelius’ tune of Finland Awakes and he re-worked it as a separate piece under the title Finlandia.

The opening chords of Finlandia with heavy brass and thundering timpani speak of repression, ominous and threatening. The woodwinds and strings bring in more gentle music that expresses a defiant struggle for freedom. The tempo accelerates to a martial episode and then the familiar slow hymn-like theme appears as a final statement of the triumph of freedom.

The final work on our program is also by Bernstein, with the full title Slava! A Political Overture (1977). This composition was written at the request of Mstislav Rostropovich for a “rousing overture” for his inaugural concerts as music director of the National Symphony Orchestra.

Rostropovich was the legendary Soviet-born cellist and conductor. His nickname was “Slava”, a shortened form of his full name but also a Russian word meaning “glory.” Bernstein and Rostropovich were longtime friends, having met in Russia in 1959 when Bernstein was there with the New York Philharmonic.

Bernstein’s music is a fun and irreverent tribute to his friend. The score is marked “fast and flamboyant.” It opens with a fanfare and a vaudevillian tune in 7/4 time. This is followed by a typical 7/8 time Bernstein melody played as a canon. The joyous tunes and contrasts make the music exciting, even hyperbolic. Near the end, Bernstein has the trombones play a few bars from the opera Boris Gudunov where the chorus sings the Russian word for glory “slava!” – and then this is the word shouted in tribute by all the orchestra players at the end of the piece: “Slava!” 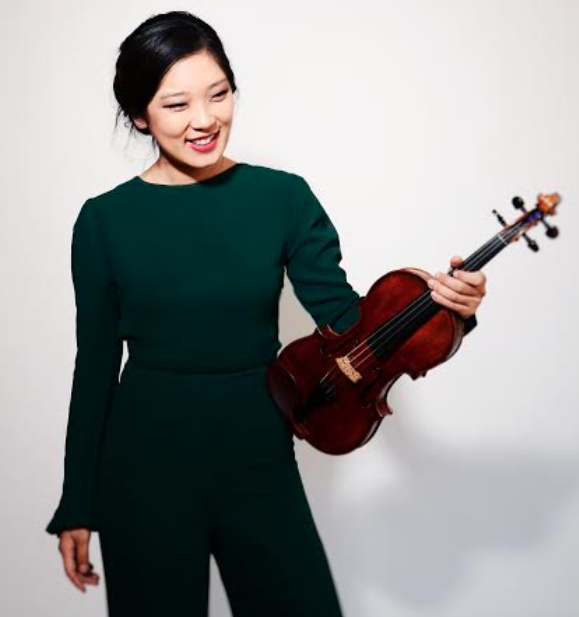 Grace Park is a dynamic violinist, dedicated chamber musician, and passionate pedagogue. Her diverse career has carried her from the world’s main concert halls as a soloist and chamber musician to giving masterclasses and teaching at universities around the country. As part of a residency at Carnegie Hall- Ensemble Connect (ACJW) program, Ms. Park pairs her elite musicianship with a commitment to community engagement.

As a soloist, Ms. Park has been the featured soloist at The Kennedy Center, Library of Congress, Walt Disney Hall, Jordan Hall, Carnegie Hall, The Grace Rainey Auditorium in the Metropolitan Museum, The Rudolfinum in Prague, and Glinka Hall in St. Petersburg- with orchestras including North Czech Philharmonia, Russian Chamber Philharmonic, Napoli Chamber Orchestra and most recently, an engagement with Maxim Vengerov at the Cartegena Music Festival and solo Bach alongside YoYo Ma at New York City Center. Upcoming concerto engagements include concerto debuts in Mexico and Poland with the Neilsen Violin Concerto.

Ms. Park plays on a 1799 Nicolas Lupot, generously on loan from a private collection.