SPECIAL NOTE: Northern Neck Orchestra concertgoers can join Music Director Michael Repper for enlightening and entertaining pre-concert talks about the music and the composer that will enhance their enjoyment of the performance. Repper shares his insights on the concert program in lively, informal presentations available to ticket holders beginning at 6:45 p.m., prior to the 7:30 p.m. performances. Details

In Collaboration with the Chesapeake Chorale
Cheryl Davis, Director

Welcome to the final concert of the Northern Neck Orchestra’s 2017-2018 season, its second conducted by Music Director Michael Repper. This performance is presented with the Chesapeake Chorale, Dr. Cheryl Brown Davis, artistic director. For this evening’s concert Maestro Repper has selected musical works that represent dances and fantasies. The program includes one of Brahms’ energetic Hungarian Dances, a selection of dramatic dances from Bizet’s Carmen, love-song waltzes from Brahms, and Beethoven’s beautiful choral fantasy.

The program opens with Hungarian Dance No. 5 (1869) by Johannes Brahms (1833-1897), clearly the most beloved and best known of the 21 Dances. This piece is enchanting and popular in itself, though it is likely best-remembered because of its use in Bugs Bunny cartoons. The music is rapid and energetic throughout. The tempo begins allegro (fast) and then becomes vivace (very fast).

Brahms loved “Hungarian” gypsy music and collected what he thought were folk tunes during his youthful touring days playing piano accompaniment for a Hungarian violinist. The tunes he loved were not ethnic peasant dances but were actually popular contemporary tunes played in coffee houses. Regardless, Brahms entertained friends at home and improvised on the tunes at concerts. He was eventually persuaded to arrange the music for the public.

Brahms arranged several sets of the Dances for four-hand piano (a single piano played by two pianists) and they proved quite lucrative. He then arranged a few of the dances for orchestra, again to huge success. The rest of the dances were eventually arranged by many different composers. The arrangement we play tonight is by conductor Albert Parlow (1822-1888).

Next on the program are selections from two suites from Georges Bizet’s opera Carmen (1874).   Bizet (1838-1875) wrote Carmen for performance at the Paris Opera Comique, where he hoped for a long run so that he could pay his bills. While not a failure, the opera was not very successful at first. Parisian audiences were expecting light entertainment with a sentimental theme, and instead Bizet gave them a drama of love, hate, death, violence, and fate. Bizet died of a heart attack at age 38 before the opera became internationally famous.

The composer Ernest Guiraud (1837-1892), a close friend of Bizet, used the original score to compile two orchestral suites, each in six movements. The orchestra will play seven dance-music selections from the suites, beginning with the Prélude that presents the “fate” theme of the opera, sounding dismal with its repeated augmented seconds. The next selection, Aragonaise, is based on a dance from the Spanish province of Aragon, and is the most characteristically “Spanish” of all the pieces, with its use of tambourine. The Intermezzo is slow, almost a Barcarole dance, featuring beautiful woodwind melodies. In the Séguedille (a Castilian folk song-dance) the oboe plays the part of Carmen’s opening seductive aria. This is followed by Habañera, Carmen’s famous aria with its descending chromatic melody. The Danse Bohème is a gypsy dance that begins quietly and builds into a frenzy. Les Toréadors is the most famous music of all: the rousing march (really a dance) of the matadors into the bull ring.

The second half of the program features the Chesapeake Chorale and orchestra performing works by Brahms and Beethoven.

The Brahms Liebeslieder Walzer Op. 52 (1869) is a set of 18 “love-song waltzes” originally composed for voices accompanied by four-hand piano. Each of the waltzes is a short (1-2 minute), charming, fresh song. Despite the brevity of the songs, they are not trifling compositions. Each song is sophisticated music expressing a variety of moods and emotions. The text for the songs was taken from various East European folk poems.

These songs are quintessential Brahms. He brought his highest artistic capabilities and techniques to even the simplest musical forms. Brahms was influenced by Schubert’s songs, which he was editing at the time, and by the music of the contemporary waltz king himself, Johann Strauss Jr. For example, No. 9 of the set seems to invoke the image of the “Blue Danube” waltz.

The songs were immediately successful, and they were eventually responsible for much of Brahms’ personal wealth because they sold so well. He likely intended the songs for casual social occasions, not concert halls. He had each song printed on a separate sheet so the performers could pick and choose their own order of performance.

Brahms was encouraged by the success of the songs, and pressured by friends, to write orchestral accompaniments, which he did for eight of the songs. Tonight we will perform seven of these: numbers 1, 2, 4, 6, 11, 8, 9, in that order. Brahms had the idea these pieces would be “pretty concert numbers” that could be performed by talented amateurs – which is just what we are doing tonight.

The final piece on the program tonight is Ludwig van Beethoven’s Choral Fantasy (1808), also called Fantasia in C Minor. The year 1808 was very productive for Beethoven (1770-1827). He composed the Fantasy to unite in a final piece all of the vocal and orchestral performers who were playing his December 22, 1808 concert that already included two of his symphonies, a concerto, and some selections from a Mass.

The premier concert was a disaster: inadequate rehearsal time, arguments with the players, and the audience had to sit in the cold for the four-hour performance because Beethoven had run out of money to heat the venue after paying for the hall and musicians. During the Fantasy, Beethoven, who was playing the solo piano part, confused the orchestra by taking a repeat that he had told them not to play. The concertmaster realized what had happened and indicated everyone should stop playing, and then they started over.

A fantasy is a piece with no set structure. Beethoven described this work as an “improvisation for piano with gradual entrance of the orchestra and finally a choral section and finale.” The work is sometimes called the “little sibling” of the 9th symphony because they have the same structure of variations on a theme played first by the orchestra and then sung by the chorus. The musical theme of the Fantasy is even similar to the “Ode to Joy” theme of the 9th symphony.

After he had finished composing the music Beethoven commissioned a poet to write words to the music. The theme of the text is universal fraternity in the arts, especially music. The text follows the music in demonstrating a leap towards joy, a passage from dark to light, a culmination of Beethoven’s ideal of love and strength united.

The work is in two movements: a 3-minute Adagio (slow) followed by Finale which encompasses many allegro (fast) tempos with a final presto (super-fast). The piano plays almost continuously, stating themes and introducing melodies for the orchestra and chorus. The 26-measure stormy introductory movement was improvised by Beethoven at the premier, and he published it a few years later.

Let us go happily from this concert into our own summer fantasies, dancing all the way.. 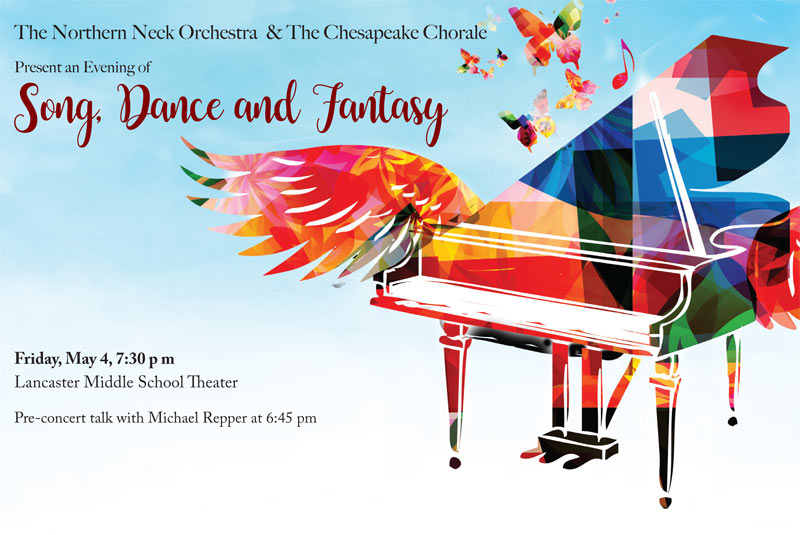