The Art of the Fugue

Northern Neck Orchestra Video Series
THE ART OF THE FUGUE

The ingenious construction of the fugue by Johann Sebastian Bach during the Baroque period is showcased in the second program of the Northern Neck Orchestra’s four-part video series “Music with Michael Repper.”

The free talk, Music for the Age of Enlightenment: The Art of the Fugue (Lecture Two), can be viewed on YouTube. All videos in the series are available continuously following their initial release. 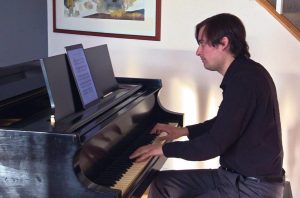 Northern Neck Music Orchestra Director Michael Repper reviews the structure of the fugue, identifies the roles of its individual lines and vividly demonstrates how their interaction creates brilliant harmonies in a performance of Bach’s exquisite C Minor Fugue from the Well-Tempered Clavier, Book 1.

He also contrasts the fugue’s use of several melodic voices with music that utilizes a single voice supported by harmony, performing the openings of Mozart’s delightful Piano Sonata in C Major and Scott Joplin’s ragtime masterwork The Entertainer.

The third program in the video series, “The Classical Era, Mozart and Beethoven,” will be available beginning on March 30.