The transformative music of Mozart and Beethoven in the Classical period is featured in the latest program of the Northern Neck Orchestra’s music appreciation video series Music with Michael Repper.

The free talk, The Classical Era, Mozart and Beethoven (Lecture 3), can be viewed on YouTube. All videos in the series are available continuously following their initial release.

Northern Neck Orchestra Music Director Michael Repper places the music of the Classical period within the context of its revolutionary era when the arts began to emphasize symmetry, order, realism and, sometimes, simplicity in contrast with the more complex forms of the Baroque period which preceded it. 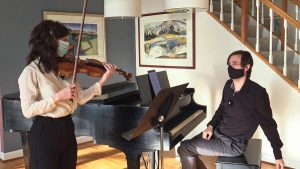 Repper plays Mozart’s memorable Piano Sonata in C Major to examine the distinct elements of the sonata form, whose influential structure continues to be used today in sonatas, symphonies and more.

The program also features a performance of Beethoven’s famous Spring Sonata for violin and piano by Northern Neck Orchestra violinist Adelya Shagidullina joined by Repper at the piano.

Shagidullina is a prize-winning Russian-American violinist and teacher who has performed at the Kimmel Center in Philadelphia, Lincoln Center, Carnegie Hall and the Disney Concert Hall in Los Angeles.

The next program in the video series, “The Romantic Era: Music for the Sake of Emotion,” reviews the Romantic period and its passionate appeal to human emotions. The video will be available on April 13. The program will feature a performance of Chopin’s Prelude No. 4 and Clara Schumann’s first Romance for Violin and Piano.